Two weeks ago, something great happened in Nashville, TN. Folks from the southeast and beyond assembled at the Nashville School of Law for PyTennessee 2014. This gathering provided an incredible opportunity for Southerners to exchange thoughts about software development with some of the top contributors and speakers in the Python community and beyond. Even though it was the first PyTennessee, it was very well organized and (as far as I know) there were no instances of racism, sexism, or any other bad-isms at the conference. When I travel outside of The South and people learn that I'm a South Carolina native (which typically happens as soon as I say anything because of my accent), these are the things that typically flash through their head because of what they may have seen on the news or what has happened in the past. I was very glad to see a tech conference of this caliber take place in the southeast and the focus was on the software and nothing else. Everyone that I spoke with at the conference was excited and eager to exchange information and learn new things. Another thing that made it exciting for me personally was that several members of hub.py were able to make the trip from Spartanburg, SC to Nashville for the conference. hub.py is the Hub City Python User Group that was started a few years ago to provide regular meet ups for folks living in rural areas in Upstate, SC to learn more about software development and Python. Meet ups are regularly held at the Ironyard's Spartanburg location. I've devoted a lot of my spare time over the last few years to promoting more 'big tech' in 'small towns' with a goal of encouraging South Carolina's rural problem solvers to consider doing more with computing. So it's no surprise that my favorite speaker at PyTennessee was @2braids. 2braids aka K Lars Lohn gave a talk about his work at Mozilla collecting and processing firefox crash reports using Python. An extremely gifted technologist, 2braids lives in a yurt on an organic farm in Oregon. He also is a biker and his nickname comes from the two braids in his duck dynasty-like beard (but he was quick to inform everyone in his talk that he didn't know any cast members). 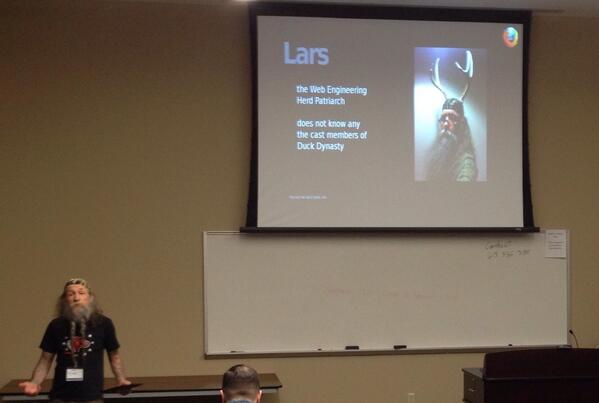 2braids also shared a couple of lightning talks about Hacking a Pellet Stove to Work with Nest and some of his work 3D printing parts for a tool organizer in his workshop.

He's a great example of what I believe many rural problem solvers in South Carolina can become provided that we give them appropriate amounts of education, equipment, and encouragement. More cool projects, including Redneck Broadband, from 2braids can be found on the twobraids blog.

I know it was a lot of work for the organizers to pull off PyTennessee 2014, but I really hope they do it again bigger and better next year. If you're looking to host a regional tech conference, they've just set the standard and provided a blueprint for success. Maybe one day we can follow this blueprint in South Carolina and host a 'rural Python conference' showcasing some of the best work from our problem solvers. Of course we'd have to get 2braids to keynote!